Government debt “erased” from the annals of the Central Bank 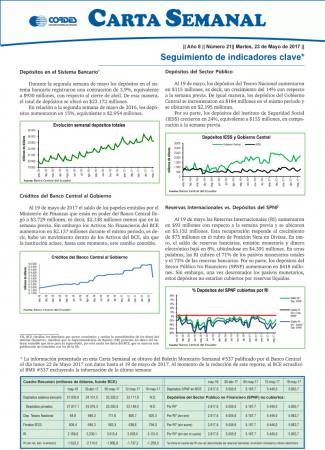 Just two days before the presidential inauguration, the Central Bank of Ecuador recorded a reduction in the obligations of the outgoing Government – with regard to liquidity facilities – with this institution, which amounted to $ 5,866.7 million.

According to the Weekly Monetary Bulletin 537 of May 19, that figure fell to $ 3,728.9 million. Although that document was no longer available on the website of the CB, the Weekly Report of the Association of Private Banks (Asobanca) set the alarms on.

5,866 million dollars was the balance of obligations the Finance Ministry had with the CB until May 12th. The report indicated that while these obligations are lower, non-financial assets increased from $ 186.1 million to $ 2,322.6 million, a difference of $ 2,138 million, the same amount of the debt decrease.

This Journal consulted the Ministries of Economic Policy, Finance, and the CB. The first two gave no explanation, arguing lack of time due to the presidential inauguration. The CB merely stated that the official information is posted on its website.