The National Government and the indigenous organizations signed the minutes of agreements of the thematic table: Public and Private Banking. With this, dialogue table number two was concluded. The authorities informed that the State will designate USD 540 million of investment for economic relief . 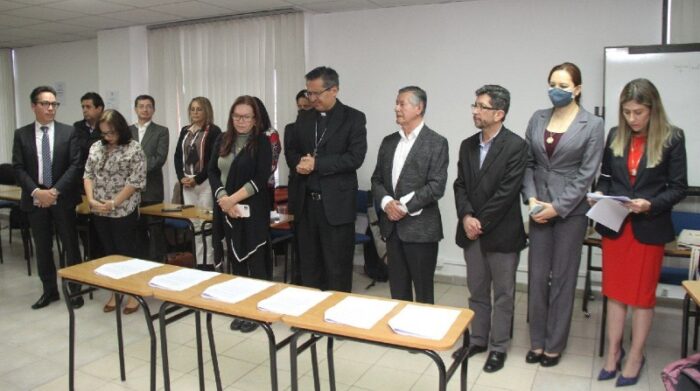 The Government and the indigenous movement reached an agreement at the Public and Private Banking table.

The head of the State portfolio said that an unprecedented event has been achieved, such as the signing of this first Act for the benefit of indigenous organizations and all of Ecuador.

“This is an effort that allows to boost the country’s economy, alleviate the financial burden of Ecuadorian families based on four points: forgiveness, refinancing, credit requalification and opening of new lines of productive credit “, said the Minister.

On the USD 540 million of investment, they include USD 120 million by the National Corporation of Popular and Solidarity Finances (Conafips). These are intended for loans in savings and credit cooperatives .

There are also USD 200 million more for credits for opportunities , USD 100 million for productive credit at 5% for a ten-year term, and USD 120 million from the National Finance Corporation (CFN) for microcredits.

Iván Andrade pointed out that “the terms of the agreement involve the accessibility of resources from public banks for groups that require microcredit. The intervention has been extended to the entire financial system”.

For those who have debts between USD 3,000 and USD 10,000, they may have a refinancing of these overdue debts, up to 10 years with a three-year grace period . And they will have the possibility of access to new credit.

For his part, Roberto Romero explained that the USD 120 million delivered by Conafips will be used for first-tier credit for rural, agricultural, trade , service and production areas and will serve to strengthen the guarantee fund.

Paulina Vela emphasized the importance of credit flexibility , which will allow a restructuring in sectors that have fallen into arrears. “We seek relief from both private banks and cooperatives. It will be analyzed case by case to provide each client with specific help, in the cases of microcredit, SME and educational credit.

He also pointed out that “customers who sign these financial relief agreements will have an A 1 rating as long as they maintain payments. This means that the client who is going to refinance with the financial entity will have the possibility of accessing new credit, more resources that allow him to keep his production running”. This is aimed at microcredit, SME credit and educational loans. ”.

Tables will be reset on Wednesday, July 20 . The theme of productive promotion will be dealt with by the Ministries of Agriculture and Livestock, Production and BanEcuador. Aspects such as the protection of agricultural production, the implementation of a State policy that guarantees profitable commercialization for agricultural producers, agricultural subsidies, among others, will be analyzed.

In the coming weeks, the tables on oil and mines and education will be installed.