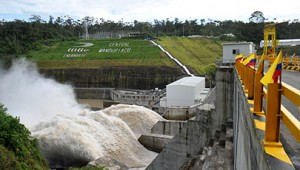 President Rafael Correa inaugurated on March 19 the Manduriacu hydroelectric power station, one of eight which plans to build with loans from China, Russia and Brazil. Located between the provinces of Pichincha and Imbabura, the project, whose investment is $ 183 million, will generate 367 GW per year with a capacity of 60MW.

The power plant, which exploits the Guayllabamba river, aims to deliver clean energy and that the nearby communities is benefit in having a hydroelectric project near.

The Ministry of Electricity and Energy Renewable of Ecuador said on its Twitter account that “Manduriacu decreases 180,000 tons of CO2, we have cleaner air”.

Vice President Jorge Glas, who was also at the opening, said it is “energy to generate more jobs and more opportunities.”