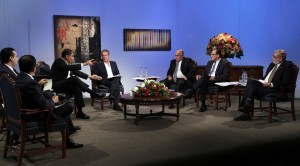 The government is working on an alternative to replace safeguards, import surcharges that will be eliminated from January to June 2016, according to the Ministry of Foreign Trade.

The choice would be the Exchange Stamp, a concept created by former vice president Alberto Dahik and that already has a first adaptation of President Rafael Correa.

The first report mentions the Exchange Stamp as an option to safeguards was published in November by Credit Suisse, a financial services organization that has participated in the positioning of bonds.

The Stamp, according to the version of Dahik, is an auction in which the object in dispute is a quota (in dollars) to import. The money raised in the auction would be directed to a fund that benefits the export sector.

This approach has raised concerns in the private sector. Credit Suisse notes that “the main concern is that the uncertainty in the economic agents could generate financial panic.”