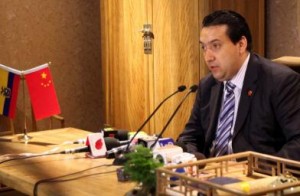 The Minister of Finance, Fausto Herrera, announced the revocation of the 5% salary increase for public employees, planned for 2015, because of the fall in oil prices, and which at the same time derived in a reduction of the state budget. The measure wasapproved from Beijing, on the official visit to China of President Rafael Correa.

The projected increase for 580,000 public sector workers was revoked due to the “worldwide current conditions,” the official said, according to statements collected by the Andes state agency.

Before his trip to China, Herrera announced that the government would cut in $ 1,420 million (3.91%) the budget for this year, precisely by the fall in oil prices in the international market.

However, Herrera remarked that the construction of hydroelectric projects will continue. “We have a plan to end the hydroelectric plants in 2015 and 2016, we are  already finishing large national works,” he said.