Group of citizens tried to attack the mayor of Loja 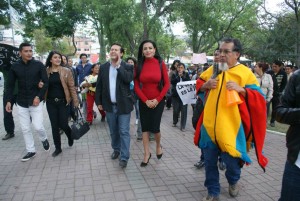 Loja mayor Jose Bolivar Castillo was forced to leave a hearing this Tuesday morning guarded by municipal officials and police agents to prevent a mob from assaulting him. However, several citizens rebuked the mayor and shouted epithets against the current government until he could take a taxi and leave the location.

In the heart of the city of Loja, more than a dozen policemen could not stop the shouts of a mob calling for the resignation of Mayor Jose Bolívar Castillo after leaving a hearing convened in the Court of Justice, by the accusation he made against Councillor Jeannine Cruz, for the publication of a tweet.

Councillor Jeannine Cruz, who also attended the hearing, said that on September 21 she posted a message on the Twitter in relation to the drinking water master plan, citing: “The Loja citizens are tired of lies and we demand that Mayor (Jose) Castillo stops stealing. I want to point out that he, as a lawyer, is unaware of international law. There is no a quarrel between politicians and politicians, It always rather exists the freedom of speech, and under that freedom of speech there is the political honor,” she says.

2015, of the last four years, the one with lowest imports