Guadalupe Fierro: ‘We must create a front for freedom of expression’ 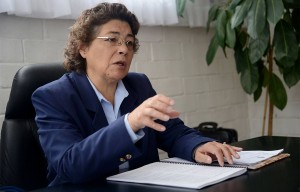 In an interview with daily El Universo, Guadalupe Fierro, the new president of the National Union of Journalists (UNP for its Spanish acronym), talks about her idea of forming a front for the defense of freedom of expression before “aggressions” by the government.

“There should be no exclusions. The most important thing is to understand that when this right is violated not only a professional job, but a fundamental right of an entire society is being restricted. “