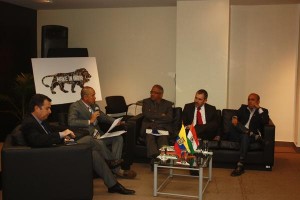 The Guayaquil Chamber of Commerce (CCG for its Spanish acronym) organized the seminar Keys to do business with India, where nearly 300 businessmen from Guayaquil participated, the same that was attended by the Ambassador of India to Ecuador and Colombia Prabhat Kumar.

Ecuadorian food products are highly demanded by India, said Juan Francisco Ballen, Undersecretary of Foreign Trade Policy at the event. He stressed the interest of Ecuador to attract Indian investments especially in gas, petrochemical, metallurgy and pharmaceutical areas.
The members of the Chamber are interested in bringing their products to new markets, therefore they are meeting with ambassadors and commercial counselors from different countries. About Ecuador, Kumar said that it is an thrust force example for its excellence and entrepreneurship, for its enviable road infrastructure, the quality of human talent and rich natural resources. “Ecuador is undoubtedly a jewel of Latin America,” he said.
The main product India buys to Ecuador is wood, especially teak. But there is a market niche for more items, especially in the food areas, such as elaborate cocoa. Until May this year, exports totaled $ 62.8 million, according to the Central Bank of Ecuador (BCE). Trade agreements between the two countries will be strengthened after the construction of the Embassy of India in the Ecuadorian territory. 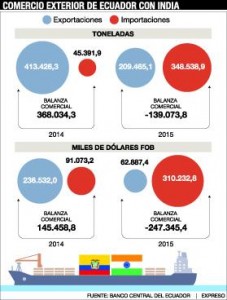