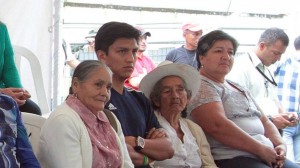 Pablo Maldonado, the young man, native of Macas who shocked Rafael Correa during the last work report when telling the president he did not have a job, after completing his studies in Geology at the University of Colorado Boulder, United States, has been already hired.

Both the Guayas Prefecture as its holder Jimmy Jairala, reported in their social networks the hiring of the young man in this institution, at the Department of Irrigation, Drainage and Dredge (Dirdra for its Spanish acronym).