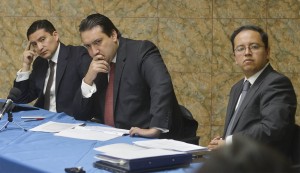 The deficit of the General State Budget (PGE) grew by $ 1,011 million, despite the tax adjustments announced by the Government.

With the new adjustment, the need for financing would officially remain at $ 7,261 million, higher than the $ 6.583,2 initial figure.

However, according to two former ministers of Finance consulted, to this figure other headings must be added to have another general figure of the real financing need of the Government for this year.

These include the pending payment of the arbitration sanction to Ecuador in the case of the Oxy oil company ($ 880 million), the debt by Treasury Certificates ($ 1,600 million) and other arrears from last year ($ 2,500 million).

Supremacy of Ecuador before Paraguay in Quito qualifying round since 1997