As featured in campaign, the  President  of the Republic, Guillermo Lasso, sent on Tuesday , May 25, 2021 to the  Assembly  the  draft  Law on Free Expression and Communication. 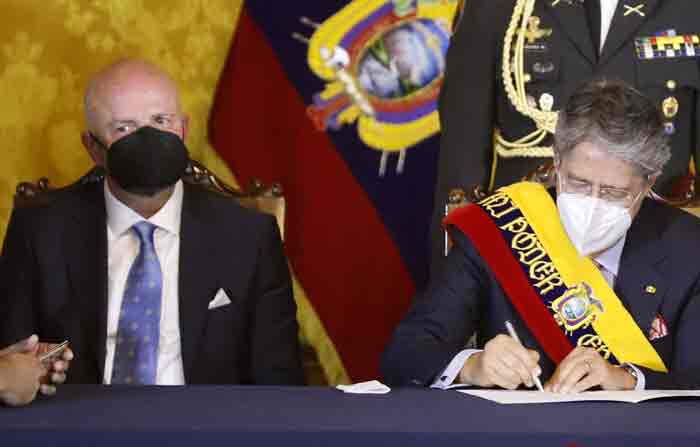 Although in principle it announced that it  would repeal  this norm, the  bill  maintains 15 articles of the Organic Law of Communication (LOC) on advertising,  national production  and  radioelectric spectrum .

The provisions include the  repeal  of article 182 and paragraph 1 of article 396 of the Comprehensive Organic Criminal Code (COIP), which classify the crime of  slander  and  violations  by  expressions  of  discredit  or  dishonor , respectively.

The project says that no media, journalist or communicator may be sanctioned for criticizing or denouncing the public power. Yes, subsequent liability is established “exclusively of a civil nature”.

Mariana Velasco, president of the  National Union of Journalists  (UNP), considers that it is a “gigantic change.” He believes that the project is not directed “to limit, silence or impede” journalism, as it happened with the law enacted in 2013.

According to the President, the project guarantees  freedom of expression ,  communication  and the  press  as a  right  that cannot be restricted. It also – he says – guarantees communicators the clause of conscience, reserve of sources and professional secrets.

The head of the  UNP  highlights that the bill establishes that those who exercise  public functions  are subject to greater scrutiny from society.

Among the articles that it is proposed to repeal include, for example, the elimination of the protection of communication workers  , which was incorporated after the murder of the journalistic team of this newspaper, perpetrated by FARC  dissidents  on the  border  with  Colombia . In addition, the article referring to labor rights would be repealed.

In President Lasso’s  project  , the self-regulation of the media is established, through its  codes of ethics  and   effective editorial policies , which would allow freer journalistic work, without the political intervention of the powers of the day in the governments.

Danilo Villarroel, president of the  National Federation of Journalists  (Fenape), questions that nothing was included about the risks that communication workers must face. “Every day we are exposed to threats, insults, persecution, intimidation …”.

Nor is anything established on  public  and  community media ,  nor is it clarified what will happen to the Council for the Regulation, Development and Promotion of Communication (Cordicom), whose creation was given via a referendum in 2011.

Both the UNP and Fenape ask to be included in the discussion of the article. This bill is the first that reaches the Assembly from the Executive and will test the majority composed of  Creo ,  Pachakutik ,  Democratic Left  (ID) and  independent legislators .

The first member of the CAL,  Darwin Pereira  (Pachakutik), considered that this project should be “enriched” with all the actors related to communication, which does not mean that the text is approved in the terms proposed by Lasso. Salvador Quishpe, his co-chair, emphasized that “freedom of expression must be for all citizens and not just for journalists.”

The coordinator of the ID,  Alejandro Jaramillo , announced that one of the aspects that will generate the greatest debate is related to the scope of media self-regulation.

On her side, the coordinator of Correísmo,  Paola Cabezas , expressed her objections to the proposal to repeal the slander. “It is intended to eliminate a regulation around communication, contradicting our Constitution and without considering that it is a popular mandate expressed at the ballot box in the popular consultation of 2011”.

The Social Christian Esteban Torres described this project as “positive”, and stressed that “it shows that the Government will not restrict freedom of the press.”

With the reforms to the  Law on the Legislative Function , Parliament must adhere to specific deadlines for the processing of this and other projects.

If the maximum terms stipulated by the norm are applied, from its qualification in the CAL and debate in the committees, the approval of the text in the Plenary will not take more than 17 months. Otherwise, the assembly members are subject to suspension from their functions, as they would incur a “very serious” administrative offense.

Thus, for example, within a maximum period of five days, the  Legislative Technical Unit  (UTL) must send a non-binding report to the Council of Administration of the Legislature (CAL). This instance, in no more than 60 days, will qualify the project and send it to a specialized commission so that in 90 days it will deliver a report for the first debate.