Guillermo Lasso met with the president of the World Bank, David Malpass

A meeting with the President of the World Bank, David Malpass, was the last activity of President Guillermo Lasso in the United States, where he attended to participate in the 76th General Assembly of the United Nations. 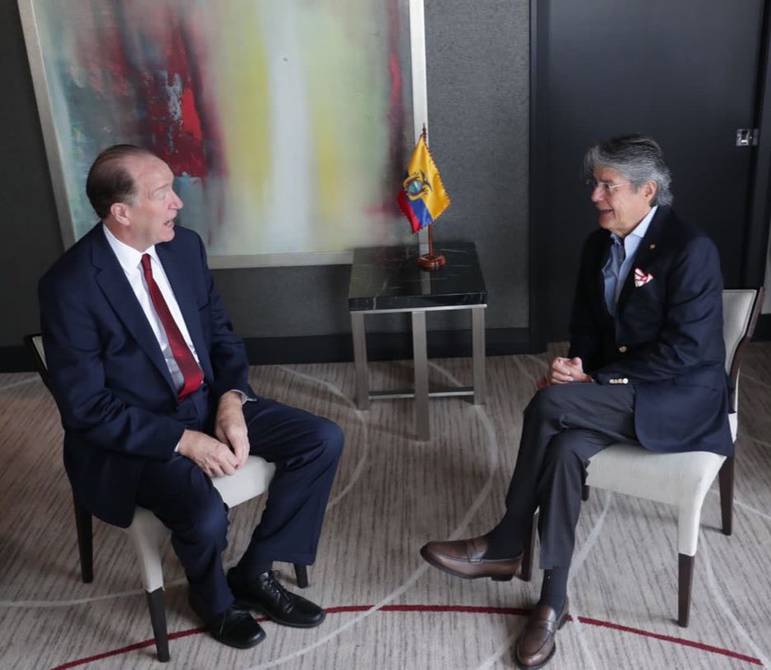 President Guillermo Lasso met with David Malpass, president of the World Bank, in the United States.

The meeting addressed aspects in which the World Bank supports Ecuador “both in budgetary resources and technical assistance to help the country develop, grow in its investments, reactivate its economy, host refugees and promote the reforms of the Government’s economic program. , which the organization welcomes”, according to the Minister of Economy and Finance, Simón Cueva.

Meanwhile, Malpass reported that future goals were analyzed to project investments that promote more employment in Ecuador, citing progress in the vaccination plan against COVID-19 that “provide the country with a stable climate for the reactivation of business and the economy”.

“The integration of the country to the world! And the defense of democratic principles, human and political rights” is the message that the Government of Ecuador left in the world in this presidential visit, said Lasso.

“Any country that wants to strengthen relations with us, in terms of trade and investment, will be welcome (…). We have a priority: to generate employment by promoting investments and modernizing the legal structure of Ecuador to promote jobs (…). This is a new international policy that plans to leave behind fourteen years of isolationism, “added the president.

Among the main messages disseminated during this visit to the United States is the struggle of the Government of the Encounter against Chronic Child Malnutrition, gender violence, the humanitarian spirit that exists in the country regarding refugees and the commitment to the ecological transition. (I)