President Guillermo Lasso broadcast a national network from 9:00 p.m. this Thursday. In the call made by the General Secretariat of Communication, it was reported that “issues of general interest to all Ecuadorians” will be addressed. 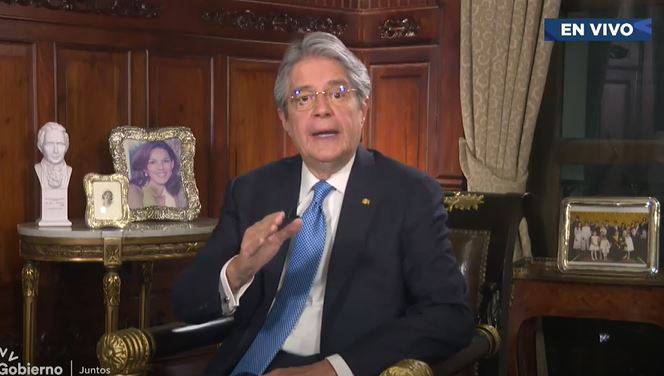 This Friday, the president will present the Law for the Creation of Opportunities in the National Assembly.

Lasso pointed out that the success obtained in vaccination should now be directed to the generation of employment.

The president indicated that when he took office the public debt reached 63,000 million dollars, which is equivalent to 63% of the local economy.

“We inherited an unsustainable fiscal deficit of 7,000 million dollars, aggravated by the pandemic, yes, but mainly caused by the poor management of past administrations,” he said.

He mentioned that only 3 out of 10 Ecuadorians have a formal job, while in the rural sector only two do.

“In total 5.8 million people today do not have a permanent job, you live it, you feel it in the street, in your homes, at your tables, on your food plates … In short, in the Ecuador of today there are no opportunities, “he said.

Faced with this situation, he mentioned that if this trend is not stopped, the situation will be more tragic in the coming years, so changes must be made to generate opportunities for the current and subsequent generations.

He warned that this Friday he will deliver to the National Assembly a law of an economic-urgent nature that he called the Law of Creation of Opportunities.

Lasso announced that it will not raise the value added tax (VAT) or the price of gas for domestic use, but rather that VAT will be eliminated for a number of basic products.

The special consumption tax will be eliminated for mobile phone plans of individuals and companies, as well as video games, electric vehicles, among others. In addition to suppressing the inheritance tax for children and spouse, as well as the exoneration of pending values ​​of this tribute to those who died during the pandemic.

As a second objective, the president mentioned that they must stabilize the economy, so there will be an adjustment in the income tax deduction.

“This will result in a greater contribution from a very small minority of Ecuadorians, just 3.5% of the Economically Active Population. That is, from those who earn over $ 24,000 per year, “he added.

This contribution will be progressive and gradual.

A special contribution will also be requested on a temporary basis to the richest strata and that will be applied for two years to those who have assets greater than $ 500,000 and only once to companies with assets greater than one million dollars that generated profits and higher sales. in 2020 than in 2019.

“This contribution should be seen for what it really is: an investment to generate a favorable economic environment within two years, an optimal environment for creating opportunities,” said President Lasso.

Regarding the workplace, he said that they will not violate any acquired right. So they are going to create an alternative and voluntary regime with new employment modalities. He also explained that whoever wants to transfer a current employee to the new code will be penalized.

Among the reforms are: more options to enjoy maternity and lactation leave that the mother can choose according to her convenience, entrepreneurs and artisans will be considered as popular businesses for tax purposes, as well as there will be no limits to the profits of the employees.

The last axis to which Lasso referred was the attraction of investments, for which he announced the creation of a new regulatory framework that provides guarantees, as well as the creation of the Secretariat of Public and Private Alliances, the enabling of free zones with tax incentives. for agroecological activities, tourism, health, among others.

The president sent a message to social organizations to analyze the initiative and that it makes no sense for them to oppose the proposal for the creation of jobs.

“If we want to reach Ecuador of opportunities, we have to choose a direction and row towards it. We have a moral obligation to change this country and make it more productive. Make no mistake: the forces of popular change, the forces of progress are represented in this Government,” he said. (I)

Guillermo Lasso met with the president of the World Bank, David Malpass