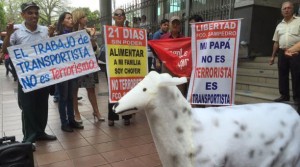 The judges of the Children and Adolescents Chamber of the Provincial Court of Guayas Thursday denied the writ of habeas corpus that had been requested by the defense of Francisco S., arrested on November 26.

That day he carried that day in a truck as a puppet sheep, which was burned during the protests that took place in downtown Guayaquil against the amendments to the Constitution, adopted by the National Assembly.

According to the police report, flags, posters, sticks and pipes were found in the vehicle.

Juan Vizueta, defense lawyer, lamented that the habeas corpus was denied “although it has been shown that the sanction of Mr. S. was an arbitrary, illegal, unlawful detention, a constitutional order was not even shown to be proceed with the citizen’s arrest.”

While the legal expert declared to the the media, that the family of the detainee shouted: “I want justice!”, Outside the room where the hearing was held.

“We will appeal against this decision of the Provincial Court,” said Vizueta.