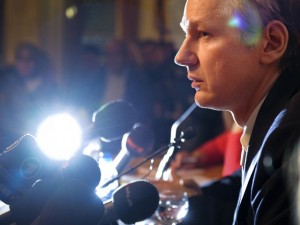 An unknown hacker who used the pseudonym Coldblood gave a radio interview to the BBC saying: “This campaign is not over from what I’ve seen. It’s still going strong. The attacks began within 12 hours of a British judges decision to deny Mr. Assange bail in Swedish extradition case, the computer hostilities caused several corporate Web sites to become inaccessible or slow.

The targets include the Web site of MasterCard, because it ceased giving donations for WikiLeaks; Amazon.com since it revoked the use of its computer servers; and PayPal, which stopped accepting donations for Assange. Visa.com was also affected as were the Web sites of the Swedish prosecutor’s office and the lawyer representing the women that claimed the sexual misconduct which are the basis of Sweden’s extradition bid.

This cyberanarchists continued their attacks, last night the Swedish government’s Web site had gone down briefly. In the last month several associates of Assange abandoned him saying that he is autocratic and capricious. They also stated that the founder has forgotten the purpose of WikiLeaks, currently the Web site is publishing classified documents of the Pentagon regarding the wars of Afghanistan and Iraq. It has also caused mistrust between U.S. government diplomats and other nations, which have forced the Secretary of State, Hillary Rodham Clinton, to express regret to world leaders due to the fear of new revelations.

The cyberattacks in Assange’s defense seem coordinated by Anonymous, a group of computer hackers’ activists. Last weekend, members of Anonymous vowed online a retribution campaign on any organization that went up against WikiLeaks. (AV)