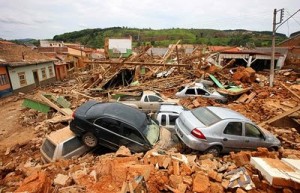 Due to the extreme weather 506 bodies have been found on the highlands of Rio de Janeiro. Meanwhile in Teresopolis, Nueva Friburgo, and Petropolis are among the most affected cities by the heavy rains, which caused landslides that buried countless of houses on the foothills.

Afterwards schools and gymnasiums were turned into shelters for the 10,400 survivors that have no home. In Nueva Friburgo, the death toll raised to 228 deceased, informed the Town Hall of Teresopolis. In Petropolis 39 victims were reported in the area of Sumidouro.

Dozens of corpses were piled outside of the police station of Teresopolis waiting to be identified; afterwards they will be taken to a church. Meanwhile firemen continue the search for bodies and missing people. Dilma Rousseff, president of the Nation, flew over the most affected areas in a helicopter and promised new help measures and decisive actions after a brief dialogue with victims of Nueva Friburgo. This tragedy is the first challenge that the president faces since she assumed the charge.

The firemen have reached Campo Grande, a neighborhood on the outskirts of Teresopolis, which was completely isolated due to the earth slides. It is estimated that over 2,000 homes were affected by the incident. The rescue teams consist on 1,000 members that have the support of seven helicopters.

According to the Civil Defense many of the neighborhoods remain isolated by the landslides and the rescuers had to make its way over tons of mud that blocked their path. The government would give 780 million of reales (around $461,5 million) to attend the emergency.