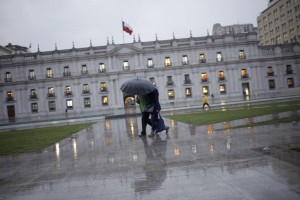 The rains of the recent days in southern Chile have left its first consequences. About 7000 people have been declared affected in the area of Los Lagos, in the south of the country.

“There are (among) 6000 to 7000 affected, counting the different provinces,” said Abud Maeztu, Mayor of Los Lagos, the most affected region.

Despite this, only 50 people are in public shelters in the area, according to data provided by the mayor.

Because of the rains it has also been registered the absence of basic services and suspension of classes.

A total of 52,430 people do not have electricity in the regions of Biobío, Araucanía, Los Ríos and Los Lagos, according to the latest report of the National Emergency Office of the Ministry of Interior and Public Security (ONEMI for its Spanish acronym).