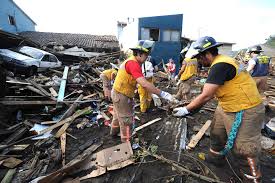 The government issued a health alert three months to the affected regions. The measure guarantees officials more resources to prevent the spread of disease.

Yet  it has not been resumed the water supply , electricity and other basic services  in Alto Hospicio, a poor area in the hills above Iquique, which was one of the most affected by the disaster.

Police reported that a baby of six days old died yesterday there due to hypothermia. The girl was sleeping in a tent in the middle of the street with her mother. Approximately 2,600 homes were damaged there and the main road from Iquique is blocked by debris after massive avalanches.

Schools are closed and hospitals only emergency responders. About a dozen babies were born in makeshift camps, attended by doctors and midwives.