A Chinese patrol involved in searches of the Malaysia Airlines flight MH370 detected on Saturday a signal in the South of the Indian Ocean, according to reports of the news agency china Xinhua, in a possible sign of the black box of the plane underwater beacon. 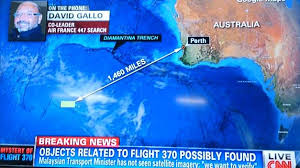 Deployed by boat Haixun 01, the black boxes detector picked up the signal at 25 degrees south latitude and about 101 degrees longitude East, reported Xinhua.

The frequency of 37.5 kilohertz (kHz) per second is currently the international standard frequency for the mark of underwater location of the black box of a plane.

Yet to be established if the signal is related to the plane, which disappeared four weeks ago with 239 people aboard, shortly after takeoff in Kuala Lumpur to Beijing.

Authorities have not ruled out a mechanical problem as the cause, but say that the evidence, including the loss of communications, suggests that the MH370 flight was diverted deliberately thousands of miles of your route.