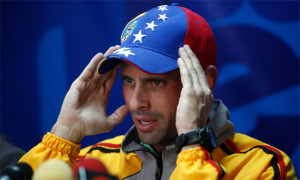 The Venezuelan opponent Henrique Capriles yesterday, August 1, called to the government “stop giving away” gasoline to countries with which the Executive has energy agreements before starting a debate on the possible increase in fuel prices in the country.

“A debate over gasoline price passes first stop giving oil to other countries, are about 7 billion a year!” Said Capriles of the social network Twitter.

The President of Venezuela, Nicolas Maduro said yesterday as “open” debate “unapologetic” in the country to establish new fuel prices for domestic consumption, at the close of the third congress of the ruling Socialist Party. For Capriles, the government wants “all Venezuelans” pay “gifts” that makes the Government through various agencies maintained by Maduro.

Maduro: We will bring the injured and orphaned Palestinian children to Venezuela