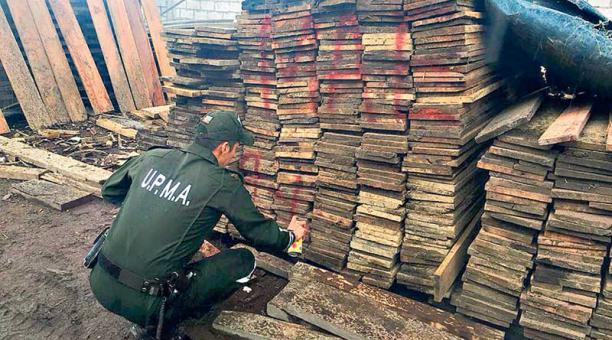 The illegal traffic of wood is one of the environmental problems that affects the provinces of the Coast and the Amazon. Zone 1 (composed of Esmeraldas, Sucumbíos, Carchi and Imbabura) occupied the first place during 2017, with 35% of all wood retentions.

This trend continues in the current year. The retentions in this period have been concentrated in Esmeraldas, where the largest volume of apprehended wood is recorded, measured in cubic meters.

During 2017, the Environmental Protection Unit (UPMA), of the National Police, retained 13,006 cubic meters of this resource throughout the country. Of that volume, 3 349.3 came from the sub-area of Esmeraldas.

In the first five months of 2018 4 285.16 cubic meters of wood have been recovered and 1 379.9 were originated in the Esmeralda province. Washington Martinez, head of the UPMA, indicates that in this area there are three fixed points of control, at the exit of the province, to retain the trucks that transport this material without permission.

They are also operational in the protected areas and run randomly inside the forests, where they also retain chainsaws and trucks. Every day, says Martinez, between 50 and 70 operations are carried out in the country. In each province there are two policemen in coordination with the authorities of the Ministry of the Environment and the Office of the Prosecutor.

Esmeraldas, Sucumbíos, Morona Santiago, Pastaza and Orellana are the provinces where the product is extracted, while Pichincha, El Oro, Chimborazo, Tungurahua, Imbabura and Azuay are considered as centers of consumption of this illegal wood that circulates in the country.

It has not yet been possible to establish the percentage of the wood that remains in the country and the amount that crosses to Colombia and Peru, through the river roads. Jessica Coronel, National Forestry Director of the MAE, points out that in the case of border areas, the staff of this entity works according to the instructions given by the security agencies. In these places, the MAE strategy changes.

“Income has been complex for us considering that we cannot enter if it is not for sure,” he says.

The focus now is on identifying new timber routes that have been created in the last 10 years in the extraction provinces. From 2013 to 2014, the amount of wood retentions in cubic meters went from 6 898 to 13 661 and from there it has remained constant.

According to Coronel, we are working on a new management model with statistics that we did not have before and with the design of a community control model. (I)