Hillary Clinton says she is “proud” of having worked with Obama 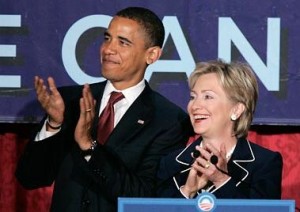 Former Secretary of State Hillary Clinton, and likely candidate for President of the United States, said that despite the “differences,” she was “proud” of having served the country under the presidency of Barack Obama.

“We have differences as well as all partners and friends,” said the former First Lady under the presidency of Bill Clinton. “I am proud of having served the country under his presidency (Obama).”

The official met last night with Obama in Martha’s Vineyard, where the president is on vacation.

Prior to this meeting, Clinton called yesterday to President Barack Obama to ensure that her recent comments distancing herself from the White House on issues like Syria are not an attack on his leadership or his policies.