With inspections and protocol reviews , authorities and hoteliers prepare to receive tourists on the beaches of Esmeraldas, Manabí, Guayas and Santa Elena. 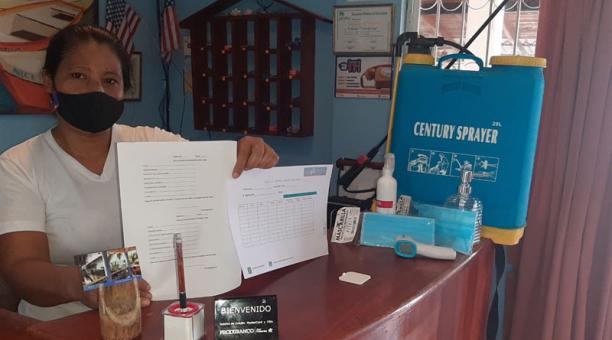 The national Emergency Operations Committee (COE) authorized for next Wednesday, August 5, the entry of visits to the spas .

In Esmeraldas, five technicians from the Tourism Department of the Municipality of Atacames visit hotels and tourist establishments prior to the reopening of the beaches of Atacames, Tonsupa, Súa and Same.

The inspections ripped June 11 at the Makana hotel in Tonsupa, one of the first to be qualified.

As of Friday, July 31, 2020, 80 hotels were approved with signage , disinfection processes and other measures.

There are 389 hotels in the canton categorized by the Ministry of Tourism, where inspections have been prioritized . There are also 10 restaurants that meet sanitary requirements to operate.

The revision of the protocols covers premises that provide services on the beach and are regulated by the Municipality of Atacames . This entity trains representatives of 80 organizations.

There are more than 400 people , including artisans, chairmen, cebicheros and bar owners.

David Rosales, president of the artisans of Atacames, confirms that little by little they comply with the requests of the cantonal COE to open their businesses . Of the 80 organizations that operate on the beaches, 25 have their permits in order.

The rest must catch up on permits, explains the Municipal Director of Tourism, Nancy Basurto.

“We have coordinated with the ECU-911 to control the distance while the application that monitors the crowds is finished installing ,” says the mayor of Atacames, Freddy Saldarriaga.

In Manabí, the municipalities of Portoviejo, Puerto López, Sucre and Manta also have biosafety plans ready . But they await the final disposition of the national COE.

A new session of the provincial COE is planned for the beginning of this week to define the list of beaches with the conditions to execute the Distance2 video surveillance plan . Crucita, the boardwalk in Puerto López, El Murcielago beach and Tarqui de Manta have this system. In that last city, the Municipality also installed a camera system to monitor crowds.

In Pedernales , the opening of the beach is in debate because the cases have not been reduced.

In Santa Elena, the beaches to be opened according to the COE pilot plan have already been defined: Montañita and Ayangue.

Luis Tenempaguay, vice president of the Provincial Chamber of Tourism, explains that a study determined the capacity for each beach. The first commune can receive 1,500 visitors and the other locality can group up to 1,200 people.

“That is part of the planning of each community. But they have not installed cameras or horns, nor is there any signage, “says Tenempaguay.

Montañita has a camera on her boardwalk. Ayangue does not have video surveillance . “At least one camera is needed every 300 meters,” adds Tenempaguay.

Although Salinas is not part of the opening plan, the Municipality is developing protocols and ordinances. The proposal involves setting between two and three accesses to the beaches to control the flow of visits.

On Sunday, August 2, 2020 in General Villamil (Guayas), the restaurants attended with biosecurity measures to the few visitors who arrived at the spa.

Esperanza López, president of the Chamber of Tourism of Beaches , explains that hotels and dining rooms are ready. “But we are concerned that the cantonal COE has not commented on the plans .”

For this reason, the tour operators summoned this Monday, August 3, the authorities to know the visit control plan and the results of the analysis of tourist load. The arrival of travelers is notable on Sundays, although López calculates that they do not exceed 300 visitors.

This holiday of August 10th

Next Saturday (August 8, 2020)begin one three – day holiday throughout the country, the First Cry of Independence.

Until last week, the National Government had not yet defined the parameters for this holiday (the fourth during the health emergency). The Executive must define, for example, whether the same curfew hours will apply .

However, until last Friday the hoteliers of Esmeraldas and Manabí did not report reservations for those days.