How is the ‘Lasso effect’ reflected in investments?

As an executive of the multinational General Motors, Fernando Agudelo lived for a period in Ecuador during the past decade. After presiding over the operation in the country, he continued in positions in South America until he retired from that company. 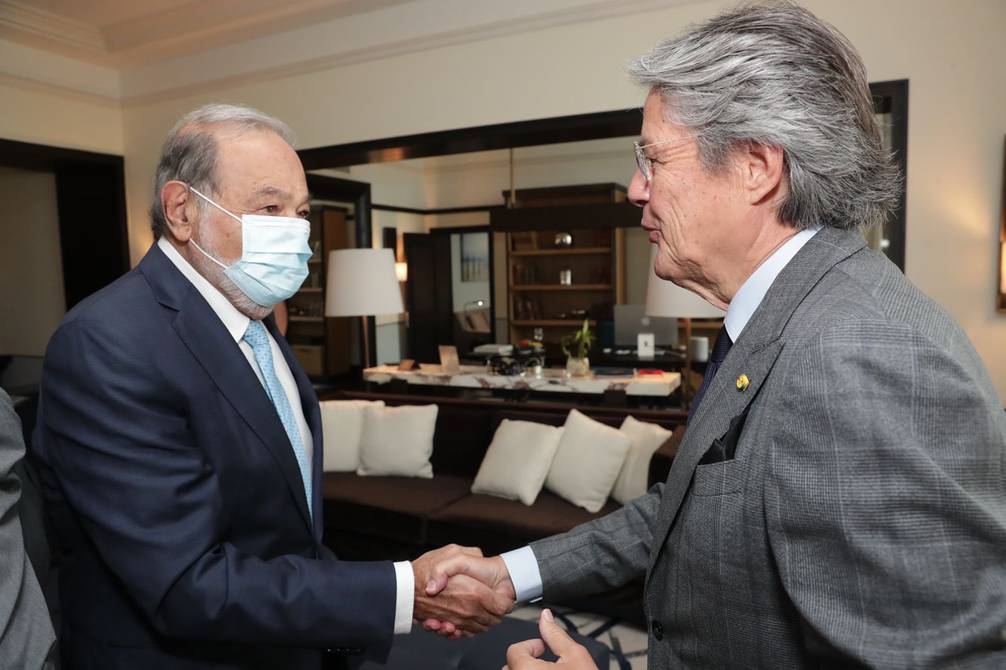 The president of Ecuador, Guillermo Lasso, greets businessman Carlos Slim, owner of Claro, with whom he met last week.

The Colombian once again set his sights on the country to be a director and part of the shareholders – along with local partners – of SZK del Ecuador. This company obtained the representation of Suzuki, which began operating this month. “Ecuador is in a very good moment, with growth prospects,” he said, referring to the outlook he perceives in the country.

The reintroduction of this Japanese brand, which will now compete independently, is one of the important investments that have been made in the automotive sector in recent months. The project involves an investment of $ 20 million and 120 jobs in the first year.

Agudelo assured that in South America countries have their cycles and Ecuador is going through one in which a positive climate for doing business is felt. Suzuki has planned eight locations this year and its intention is to expand its network in the coming years.

In recent months, other business groups such as the Favorite Corporation have announced new investments in a Megamaxi, in Cuenca, which will demand $ 36 million. It will also have investments in the Mall del Norte, in Guayaquil, which will require $ 50 million.

The KFC group, which manages a network of fast-food restaurant chains, has a plan to open 135 stores from 2021 to 2025. Pronobis and Innovum have real estate projects underway in Guayas.

To this are added other investments that firms such as Pronaca and Arca have planned in purchases of local companies and that have received endorsement from the control authorities in recent weeks.

In the tweet and even business atmosphere, several of these announced investments have been linked to #efectolasso, a kind of positive repercussion due to the arrival of a government open to private investment.

Freddy García, director of economic and statistical studies at the firm Inteligencia Empresarial, considered that it is likely that the investments that are being made now and for the short term have already been planned, but the certainty of a change of government was needed to begin to execute them.

An executive of one of the companies that have announced projects commented that the change of government brought tranquility to be able to continue with a project that had been in the works since before the presidential elections.

Garcia indicated that planning an investment takes time. In that sense, he estimated that the new investments motivated by the change of government would only be taking shape on paper.

In the business sector, however, there is talk that there are signs that the Government is giving that point to a new economic moment, and that could motivate a greater movement in investments.

Pablo Zambrano, executive president of the Chamber of Industries and Production, said that the planning being carried out by the Ministry of Production for economic recovery, the creation of productive clusters, the return of Ecuador to the Agreement on Settlement of Investment Disputes between States (ICSID) and the elimination of tariff items are aspects that help attract investment.

The union spokesperson also noted as positive the announcements that have been made to attract investment in the mining, oil and other sectors.

During forums that have been held, officials from the Ministry of Production have been in charge of positioning the idea that the Government is outlining the way to make the country more attractive for investment. In addition, current incentives are being promoted, such as tax exemptions, which are given for new projects.

On Monday afternoon, the Minister of Production, Julio José Prado, announced that new investment contracts were approved for an amount that exceeds $ 500 million in mining, services, and agro-industries.

Until the end of this year, Prado estimated to close at $ 2,200 million in investments under this modality.

Analysts and businessmen emphasize that President Guillermo Lasso, regardless of the current of certain governments, is taking steps to be able to attract investments and increase those that already are, as with Mexican companies. Lasso met in Mexico days ago with businessmen who have relevant investments in Ecuador such as Carlos Slim, owner of Claro.

Jorge Ayala, manager of the firm Bizwell Consulting Group, considered that work should be done on a number of reforms that encourage investors to bring their resources, despite the limitation that being an unattractive country could mean because it is small.

“It is essential that the Government begin to work on structural and institutional reforms that give the investor a framework of stability and generate confidence, this in order to eliminate bureaucratic obstacles such as, for example, in foreign trade activities, inefficient regulations, among others”, indicated Ayala.

The specialist, for example, stated that stability is required in the rules of the game in tax matters, with a long-term horizon so that the investor can plan adequately.

The executive president of the Chamber of Industries and Production said that the challenge for the coming weeks will be to know details of the proposal for the tax reform and other macroeconomic aspects. “It would be important to have more definitions in this regard,” said Zambrano. (I)

The countries from which the greatest corporate investment comes

The corporate investments that are registered in the Superintendency of Companies reached $ 750 million from January until last August 26.

Guayas and Pichincha concentrate the largest amounts of corporate investment so far this year, with $ 477 million and $ 201 million, respectively.

After the items generated in Ecuador, the largest amounts of corporate investment come from companies with links in Switzerland, Mexico and Spain.

From January to August 26, Switzerland originates $ 66 million; from Mexico, $ 37 million; and, from Spain, $ 30 million, according to data from the Superintendency of Companies.

Important multinationals from these countries operate in Ecuador and have a presence in the food, telecommunications and fishing sectors.

Company incorporations have seen an increase this year. From January to July 2021, the constitutions had a growth of 98%, compared to the same period of the previous year. And as of August 26, 10,229 were already constituted and only 2 liquidated. (I)

La Clementina, in constant renegotiation with the CFN and paying only interests