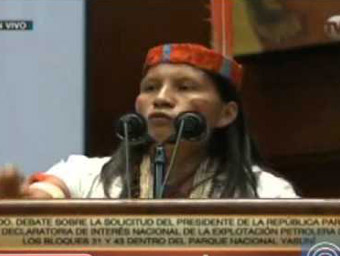 Alicia Cahuilla, representative of the huaorani people, attended the plenary of the National Assembly invited by the ruling party, to publicize her opinion before the vote on the report of the second debate to declare of national interest the oil blocks 31 and 43 of the Yasuní National Park, that was requested by the President of Ecuador, Rafael Correa.

“They should consult us to exploit the Yasuni,” said Cahuilla, who questioned the current and previous Governments by the constant changes of the territories of the peoples in voluntary isolation and especially of the huaorani people.

The leader of the Amazonian people also criticized that for decades, the oil exploitation hasn’t benefited them, but instead, they have received pollution in return and their lands have been destroyed, and said that the massacre occurred last March within the Taromenane people was the result of the opening of roads in their territory, so they demand respect.

The intervention of Cahuilla provoked applause from the Assembly members of the opposition, while the officials hesitate to applaud.

For his part, the Mayor of Lago Agrio, Joffre Poma, defended the proposal of the President to exploit blocks 31 and 43 of the Yasuni Park because it is “responsible and has the spirit of life”.

In addition, Carlos Viteri Gualinga, pro-Government and proponent of the Declaration report, noted that the rights of peoples and ancestral nationalities are not in discussion, since the report protects the rights of peoples in voluntary isolation excluding any extractive activities  in the intangible zone.