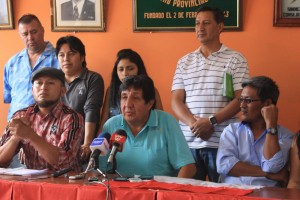 A sector of Imbabura drivers joins the nationwide strike tomorrow organized by trade unions and social organizations, announced Pablo Ruiz, president of the Pre-Chamber of Transport of the province, at a press conference.

Ruiz said they will participate in the march planned for 16:00 am in Ibarra, because they want to be heard by the government.

But he warned that “we can not paralyze as public transportation, but support the peaceful march,” said Ruiz, who announced that taxi drivers and truck cooperatives would join also.

He added that there was no dialogue in the meeting held by President Rafael Correa and his colleagues from other unions in Quito last week. “We consider that Alberto Arias (AP Assemblyman and leader of the drivers) is not our representative, when he should have represented us in the Assembly, he never did, even less, he will not do it now.”