Imbabura is the most visited in Zone 1 by foreigners 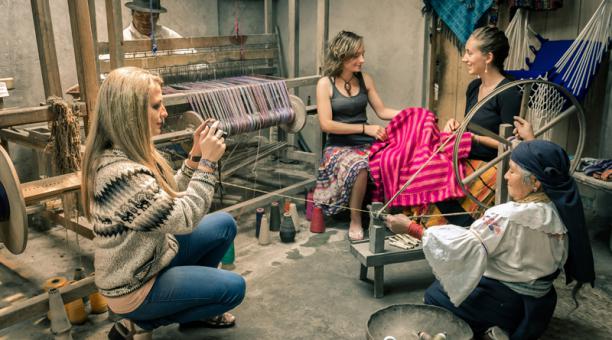 Imbabura was the province that had more foreign visitors in the last six years within Zone 1, totaling 1.6 million tourists, followed by Esmeraldas (612 225), Carchi (227 989) and Sucumbíos (206 258), according to the information collected by the Statistics and Research Coordination of the Ministry of Tourism (MinTur).

According to Carlos Acosta, coordinator of the MinTur of Zone 1, cultural tourism and the natural destinations of the ‘Province of the Lakes’ has aroused greater interest of foreign tourists.

Community tourism is one of the forts of this province. Íntag, Cotacachi and Otavalo are destinations with options for this type of experience. “In the coming months, the Ministry of Tourism will further promote the magical towns that the province has, to attract more tourists,” Acosta added.

According to the multidimensional statistics of the Internal Revenue Service, Imbabura recorded USD 42.4 million last year for activities such as accommodation and food services, focused on tourism; while in recreation an economic benefit was generated that exceeds USD 5.6 million.

In Sucumbíos, to the experience of community tourism with the Cofanes, Siona and Kichwas, tours were added for their natural destinations. Among them are the rides in the lagoons of Limoncocha, Delfincocha, Imuya, Garzacocha, Yanacocha, in addition to the Cuyabeno. Luis Galarza, president of the Provincial Chamber of Tourism of Sucumbíos, says that these destinations were very popular among Americans, Canadians and Europeans until before April 23 this year, when the embassies of the United States, the United Kingdom and Germany They issued an alert for tourists visiting the border area between Ecuador and Colombia, due to the conflict that sparked the dissent.

For Luis Eduardo Rodríguez, tour guide in Muisne, European tourists experiment with activities that were previously unsuspected. One of them is the collection of shells and crabs in the surrounding mangroves.

“They do not care about the difficulties to make their way or be bitten by mosquitoes; they seek to feel what a native of the area lives, “he says. Armengol Pineida, manager of Ecovida Explorer, says that boat rides through the estuaries of the Esmeraldas and Súa rivers have aroused great interest in foreign tourists, due to the large amount of wildlife that exists, however, the national tourist little Interested in exploring these attractions.

According to Gustavo Loor, president of the Parochial Board of Tonsupa, abroad is also attracted from the gastronomy. That’s why they have sought variety in its gastronomic offer. In this aspect, the residents have specialized in cocktails, being the Tonsupa in the Night its most representative drink.

In 2017, more Colombian tourists visited Esmeraldas (11,961), followed by Filipinos (4,336) and Indians (917), according to the migratory movements of the Ministry of the Interior. In the Carchi, bird tourism continues to grow, according to Carlos Acosta.

In the border province, the Cerro Golondrinas Protected Forest is one of the most visited places by international tourists, because it is home to more than 700 species of birds. Carchi received his highest number of visits from Venezuela and Colombia. The French and Americans are looking for more Carchenses destinations to photograph birds. (I)

Courtship does not cover the sexual abuse of priests