The Executive Board of the International Monetary Fund (IMF) announced that it has concluded the sixth and final review of the 27-month Expanded Facility of the Fund (SAF) for Ecuador. One of the first actions it will take will be the immediate disbursement of US$700 million. 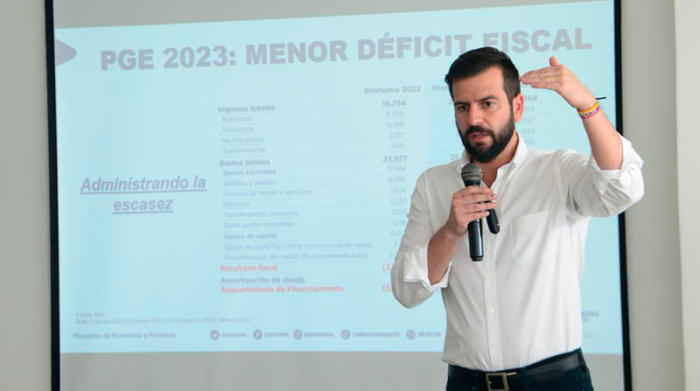 Referential image. In the image the Minister of Finance Pablo Arosemena.

Ecuador’s FEP-backed economic program “has helped stabilize the economy, strengthened fiscal and debt sustainability, strengthened the foundations of the dollarization regime, expanded the coverage of social assistance programs to protect vulnerable, has promoted a transparent and more efficient management of public resources and has laid the foundations for sustainable and inclusive growth “, says a document published by the IMF on its website.

“Ecuador has reached an important milestone with the completion of the EFF-supported program, the first completion in two decades. The program has contributed to mitigating the socioeconomic effects of the pandemic and other external shocks, while maintaining macroeconomic stability,” said Antoinette Monsio Sayeh, IMF Deputy Managing Director.

“Prudent fiscal management enabled the authorities to meet all quantitative performance criteria by end-August 2022 and the public sector is expected to post its first surplus since 2008. The social safety net has been further strengthened and now reaches more 80% of low-income families, even in remote areas,” Sayeh added.

The representatives of  the International Monetary Fund (IMF) fulfill an agenda of  activities in Ecuador , as part of the review program of the agreement with the country.

On December 9, 2022, members of the multilateral and the  World Bank (WB)  met with the general manager of the Bank of the Ecuadorian Social Security Institute (Biess), Carlos Julio Arosemena.

The objective of the meeting was to expose to the representatives of the international organizations, the financial strategy applied by the bank for the administration of the pension funds.

Among the specific topics developed, the regulatory framework and the  Biess funding system were addressed . In addition, the evolution of financial statements, risk management, the composition of credit and investment portfolios, the evolution of assets as well as the indicators of profitability, solvency and liquidity of the entity were addressed.

Official of the Municipality of Guayaquil, accused of causing a traffic accident