In Daule, the MAG began the delivery of urea with a subsidy of 50% of its commercial cost

The Ministry of Agriculture and Livestock (MAG) began this week the delivery of bags of urea with the benefit of the subsidy of 50% of its commercial cost. The first beneficiaries were farmers from the Daule canton area, where the head of the MAG, Bernardo Manzano, went last Tuesday to deliver the first sacks. 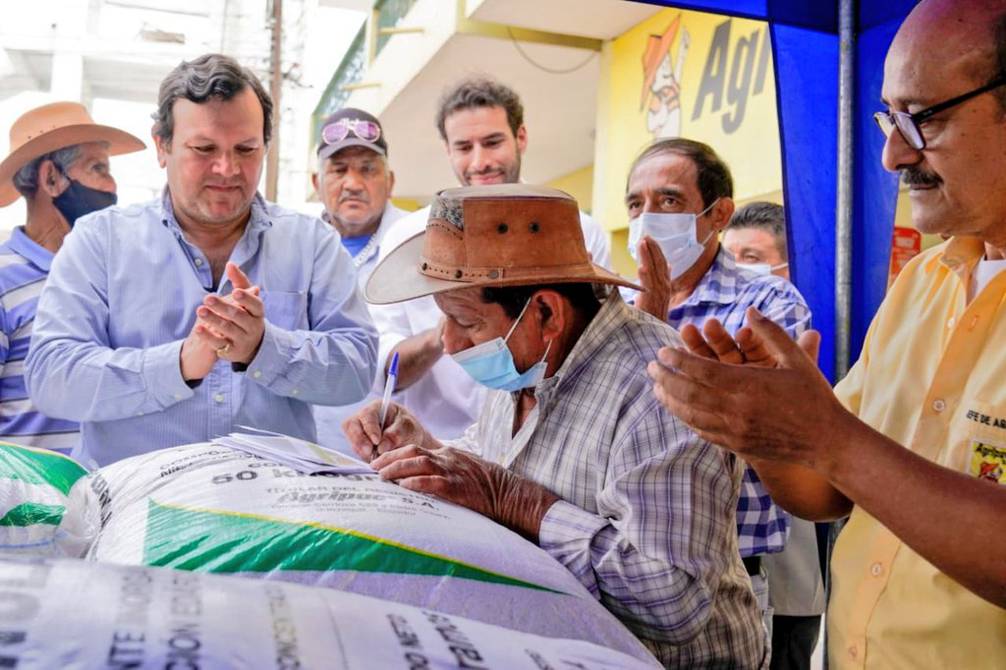 One of the beneficiary rice farmers signs the receipt documents for the bags of subsidized urea. The Minister of Agriculture and Livestock, Bernardo Manzano (I), delivered the product to the first beneficiaries.

This is one of the compensation and incentive measures announced by the President of the Republic, Guillermo Lasso, after the stoppages last June called by the Confederation of Indigenous Nationalities of Ecuador (Conaie).

Manzano assured that the bag of urea costs $48, of which the Government pays $24. Regarding the delivery system of the product, the minister assured that “the issue of corruption must be avoided” by acknowledging that when the State imports and distribution “is a lot of trouble”, for which he explained that the infrastructure of recognized commercial houses has been used, such as Agripac and Fertisa, through which the benefit is distributed.

Urea mainly serves producers of rice, corn, wheat, potatoes, pastures, sugar cane and fruit trees. Its importance lies in its high nitrogen content, which allows the growth of plants, helping in their nutrition and in improving crop yields.

The conflict that Russia maintains with Ukraine affected the commercialization of this input, since that country is the main supplier of Ecuador. In 2021 it provided 36% of fertilizer. The rest came from Finland (23%), Estonia (17%), China (10%) and Indonesia (8%).

Meanwhile, Manzano added that the Government is investing $27 million in this process that will directly and indirectly benefit more than 250,000 small producers.

“Agriculture has to be profitable,” said Manzano during the delivery of the first sacks to rice producers in Daule.

He specified that the delivery of subsidized urea is a concrete fact to improve agricultural production and support rural development and that MAG technicians also visit the farms to register the producers.

Among the first beneficiaries were Miguel Rufino, René Tutivén and Edulfo Loy, rice farmers from Daule, who received the urea nutritional packages after the Undersecretary of Agricultural Production, Diego Arosemena, confirmed that they were registered to access the benefit.

For this registration, the MAG opened the platform called the Nitrogenated Fertilizer System ( Sisfen) , as is done with the delivery of technological packages of the National Seed Project for Strategic Agricultural Chains.

How is the process to benefit? Technicians from the MAG’s Technical Assistance and Rural Extension Innovation Project ( Piater) collect information from producers during the technical visits they carry out farm by farm. This is entered into the Sisfen platform.

The technicians fill in the requested fields and upload the scan of the farm verification to the system and for the delivery of the product, the farmer must follow the following steps: