In Guayaquil they will produce fly flour to make balanced

Although fish is one of the most common, the flours that serve as food or balanced for animals come from multiple sources: there are other seafood such as shrimp and squid; or meat and poultry products. Also, from vegetables such as soybeans, quinoa, wheat, cotton, sorghum or corn. And now also … insects. 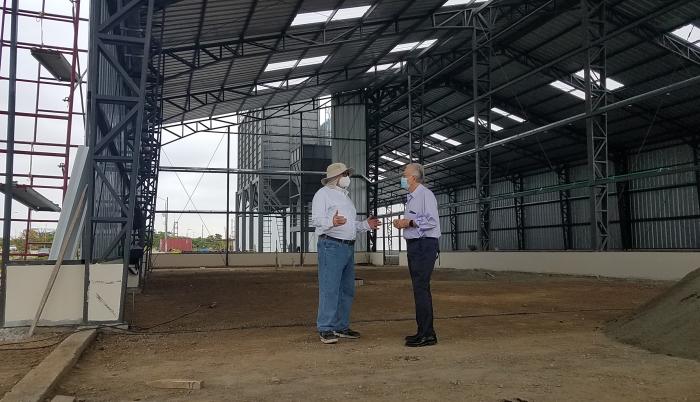 The manager of the Bioconversión company, Mauricio Laniado; and the president of the ZEDE del Litoral, Sergio Flores, during a tour of the plant under construction.

But not any of them. It is specifically a fly known as ‘Black Soldier’ ​​(Hermetia Illucens). And in the same way that occurs in the cases of animal sources, in order to generate a production at scale, this system requires that the insects be raised and cultivated on farms, where they are fed by organic waste from the agro-industry.

In simpler terms, they are flies raised on the remains of fruits and vegetables that are discarded by juices and processed foods. Waste that currently ends up in garbage dumps.

“The larva of the fly grows, fattens, is harvested, processed and converted into insect meal of at least 45% protein and 26% fat,” says Mauricio Laniado, manager of Bioconversión, a local private company that is setting up a 2,700-square-meter plant in Guayaquil to apply this system.

Bioconversión is building the plant on the land of the Special Economic Development Zone (ZEDE) of the Litoral, the regional innovation and technology transfer project of the Escuela Superior Politécnica del Litoral (Espol).

“Furthermore, as a by-product, what the larvae excretes when eating is an organic fertilizer rich in nitrogen, phosphorus, potassium and various microelements to improve agricultural soil and fertilize it,” adds Laniado.

In other words, everything is reused. “It is an example of what is known as the circular economy,” says the president of the ZEDE del Litoral, Sergio Flores.

And although they point to the agribusiness sector as a supplier of waste, they also expect to receive waste from households, where organic remains are the largest amount of waste.

Laniado cites other advantages of insect meal over others such as fish meal. It says that 30% of the fish population is overexploited, that is, fished beyond its ability to reproduce; and more than 60% exploited to its limit. And that this affects the food chain of marine fauna.

Flores agrees that it is the type of project they are promoting: that there are none in the country and that it offers added value such as its environmental benefit. And substitute a necessary product for another with more protein value, but at a lower cost.

BUREAUCRATIC DELAYS AND OFFERINGS ON HOLD

The Ministry of Production and other government bodies are the ones that approve the projects that can be installed in a ZEDE. Delays in the procedures and authorizations have delayed the construction of this plant, according to Mauricio Laniado.

To this are added other necessary procedures, but which take, at their discretion, excessively. He affirms that he has had to wait months for an environmental permit and even a request for an electrical connection for the plant.

The president of the ZEDE del Litoral, Sergio Flores, says that similar reasons slow down the arrival of other companies. It is also waiting for the Municipality of Guayaquil to fulfill an offer made since the previous administration to build an internal road that crosses the ZEDE land.