In Quito, 195 friendly points for cyclists were mapped 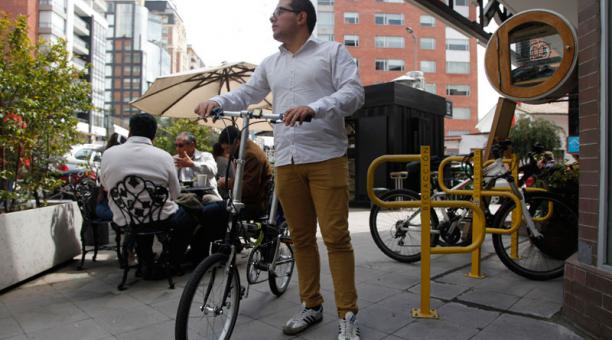 María José Yépez is a professor at the Faculty of Architecture of the Central University and moves by bicycle. A few days ago he deviated from his usual route to make purchases. He did not know where to leave his bicycle and, she says, the ‘app’ Urbamapp to locate safe parking was his best option. “The application showed me that in the shopping center where I was going to do my shopping, there were parking lots for bicycles. It was a safe option, because that parking has as a security measure a record of my name and the characteristics of my bike, “said Yepez.

In Quito, the cycle path network is concentrated in the center-north and in specific sites of the valleys. Cyclists in this part of the city, therefore, have greater facilities than people living in the south, for example. To put this application into operation, the Biciacción group, Urbamapp (was responsible for the design of the ‘app’) and students from the Faculty of Architecture of the Central University, came together.

Yépez is not only a user but helped in the location of the so-called biciamigables points. As part of the subject taught, he worked with 60 students who concentrated on locating parking lots, workshops and bicycle stores. Between December last year and January 2018, they concentrated on locating the points near the northern bike lanes and also within a radius of 500 m around the stations of the future Quito Metro. The objective – said Yépez – is to look for intermodality in transport systems.

That is, that the bicycle can be combined with public transport as an option to mobilize. Ana María Quiros, of Urbamapp, said that among the students and cyclists who participated in the project, 195 biciamigable points were located. Of these, 94 are parking spaces, 14 bicycle shops, 20 mechanics workshops for the bike and 28 stores that also have a mechanics workshop.

But what makes a place a bike friendly? Carlos Zurita, from Biciacción, said that safety was taken into account, above all. “For example, to define the parking lots we saw the quality of the installation, which is not easy to break and there is surveillance”. Zurita indicated that once the points were located there was an approach with the owners of the places to ensure access to the parking lot. Some bicycle parking lots by the Municipality are included in the map.

However, according to Zurita, for the proper use of all the sites that the Cabildo offers, security still needs to be implemented. With that, Yépez agrees. “The parking lots that are located in the transport stations do not have enough surveillance because the guards are looking for other security issues,” he said.

The data from the Metropolitan Mobility and Public Works Company (Epmmop) show that there are 171 places to leave bicycles between public transport terminals, parks and parking lots in the Historic Center. To download the ‘app’ you must enter the Urbana Map web portal. Once there you have to look for the bicycle map. (I)