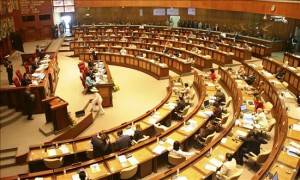 The indefinite reelection for authorities of popular election was the central theme in the discussion of the report for the first debate of the 16 constitutional amendments in the legislature.

Since Monday, when they received the text, until yesterday, legislators debated the 68 pages text, prepared by the Special Commission, without obtaining the approval.

Marcela Aguinaga justified, for example, that the “constituent (in the Assembly of Montecristi) did not write the Constitution in stone.”

Legislator Antonio Posso (Avanza) indicated that indefinite reelection is not appropriate . “Two reelections will be more than enough,” he said.

Cynthia Viteri (PSC-MG) criticized the proposal of a constitutional amendment and not a referendum in the country, and said: “There is only one person who needs the reform: Rafael Correa.”

The parliament expected to approve the report last night, to start socializing it in the provinces.