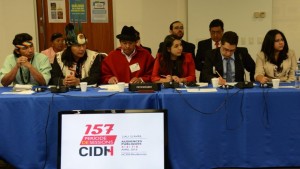 They returned to the Inter-American Commission on Human Rights (IACHR) in Washington, as representatives of civil society. The indigenous spoke of the right to free association; while a woman exposed the case of her missing son.

Three indigenous leaders and their lawyers claim that their right to association has been affected since 2015.

In that year the government transferred the powers of registration and legalization of the indigenous communitiesand nationalities to the undersecretary of Peoples and Cultural Diversity of the Secretariat of Policy.

Jorge Herrera, president of CONAIE, denounced that “the government has divided the historically structured groups”. Franco Viteri, of the Amazonian confederation, also denounced “the attempt to weaken the organizational structures.” And he told his case: in September 2015 a parallel board was formed following the participation of Confeniae in the social mobilizations of August 10.