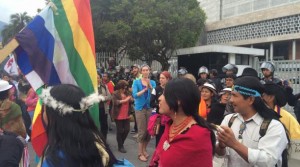 The flag of the indigenous peoples led the demonstration for the People’s Summit, which started this March 5 at 16:20, in Plaza Indoamérica, in northern Quito, heading to the National Assembly to deliver a manifesto of 18 points.

Upon reaching the Assembly exteriors, the representatives requested to be received by the legislators to deliver their manifesto. Among the set points there is the guaranteening of the land redistribution within draft Law on Lands and Territories the Legislative branch currently processes.

The agenda will continue tomorrow with the analysis in nine thematic roundtables of the current problems of the movement.