Indigenous march walks through the streets of Cuenca 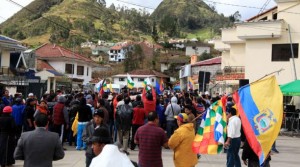 The March for Dignity entered to Cuenca after 18:00 Wednesday, August 5th, as part of the walk to Quito for the national strike on August 13th.

The marchers headed to the historic center crossing the Loja Avenue. On the way they received food and beverages from the inhabitants of some neighborhoods.

In the historic center, the march encountered a group of supporters of Alianza País. Both sides shouted slogans in favor and against the government. A group of policemen stood between the two groups to avoid clashes.

Thursday August 6th, 2015 the walk will go through the Azogues, Biblián, Cañar and El Tambo counties. In that province (Cañar), the indigenous march will be supported by the Provincial Union of Cañaris Municipalities and Cooperatives.