Indigenous marchs are analyzed in the Conaie Forum 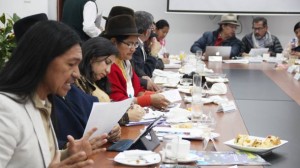 Last Monday October 12 the Confederation of Indigenous Nationalities of Ecuador (Conaie) held a forum to analyze the crisis in the indigenous sector and extractivism in the demonstrations that began last August.

“We have declared 2015 as the year of resistance and struggle,” said Jorge Herrera, president of Conaie, minutes before starting the talks at the Universidad Andina.

In her presentation, the former Foreign Minister Nina Pacari Vega said that the government is using various tools to divide them; for example “the repression via prosecution.” And thus, through the “fear,” this could impact on the structure of the peoples, she said.

There will be a special police report for micro-traffickers