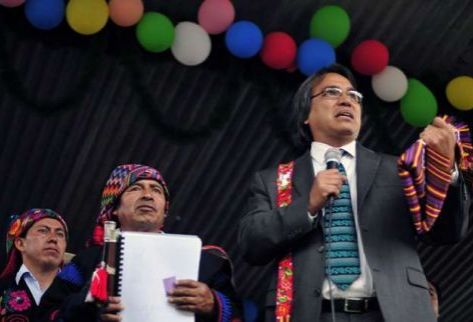 Indigenous organizations complained to representatives of the United Nations (UN) in Ecuador the decision of the Constitutional Court (CC) to recognize as jurisdiction of the common justice the trial and punishment of crimes against the life in which members of an indigenous community are involved.

Leaders of Conaie, Ecuarunari, Pachakutik and others came to the international organization to extend an invitation to the Special Rapporteurs on Human Rights and for Indigenous Peoples to visit the country and see the “permanent violation of the rights of indigenous villages,” said the President of the Ecuarunari Carlos Pérez Guartambel.

On indigenous justice, the President of Conaie Jorge Herrera, considered that this “(distinguishes) from the ordinary justice because it takes (the case) holistically. A problem that raises in the commune as death is not a particular problem, but rather integral and the procedures are performed in accordance with the community. There are own ancient rules.”