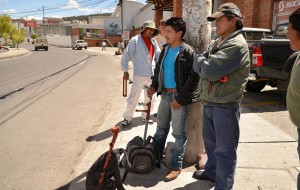 2015 closes with layoffs in various productive sectors and shows two examples: the mayor of Lago Agrio, Vinicio Vega, estimated that there was a reduction of 5,000 workers in the oil companies, and the Minister of Production Vinicio Alvarado, confirmed that the Maresa corporation dismissed 300 people because it will no longer assemble vehicles in the country.

For Francisco Alarcon, head of the Chamber of Industries of Guayaquil, termination is a symptom of the national economic situation.

He said that employers are not interested in laying off workers due to the “human factor” and because it generates a “hostile” work environment, but they reach that ‘limit’ because the situation in the company “is very difficult.”

Jose Mieles, researcher at the Corporation for Development Studies (Cordes), said that the problem is that the economy has ‘cooled down,’ since its ‘motor,’ the public sector, has fewer resources.

He added that the state receives less revenue due to lower oil prices, and that this in turn slows down public works.

Mieles referred to figures from the National Institute of Statistics and Census (INEC), which last September stood unemployment at 4.3%, ie more than the same month of 2014 when it stood at 3.9%.

That source stood inadequate employment at 49.2% last September, and at 48% in the same month last year.

$ 900,000 were assigned to publicize induction cookers