Insurrection in Libya Controls the West of the Nation 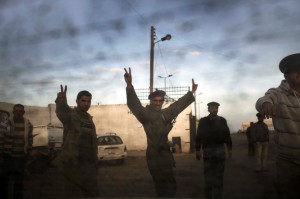 Insurrection in Libya Controls the West of the Nation

The Libyan regime began to tremble when their leader, Muammar Gadhafi lost control of the west zone of the country. Meanwhile the number of victims due to the riots continues to increase. The International Federation of Human Rights (IFHR) informed that the official death toll is 640 victims. However, a member of the Penal International Court, Sayed al Shanuka, spoke of ten thousand casualties.

Meanwhile the army of Al Yabal al Ajdar, in the capital of Al Baida, joined the revolution. Several activists and witnesses informed that several popular committees have organized themselves to protect their cities. The security forces, still loyal to Gaddafi attacked protesters that gathered in the city of Musratha, with machine guns and rocket launchers.

In Tripoli, the civilians live in terror because of the armed supporters of Gaddafi that roam the streets chanting “long live Gaddafi.” The city is filled with armed mercenaries. Several nations of the world see the events of Libya as a blood bath. The 42-year-old tyrannical regime of Muammar al Gaddafi faces a rebellion without precedents since February 15. Several of his government members are resigning to their positions like, the Ministry of Interior, Abdel Fatah Yunes, the Ministry of Justice, Mustafa Abdel Yalil.