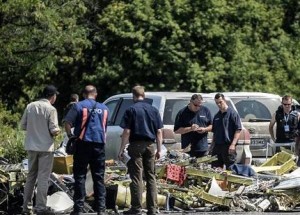 The group of international experts has arrived this Thursday to the area controlled by the pro-Russian separatists in eastern Ukraine, where it was shot down the Malaysia Airlines MH17 flight with 298 passengers on board two weeks ago.

According to a statement of the OSCE via Twitter, “OSCE observers have for the first time in almost a week arrived at the MH17 jet crash scene and they are escorted by four experts from the Netherlands and Australia. A new route was used to get to the area. ”

“I am very happy that just two weeks after the crash MH17 we have been able to enter the area,” informed the head of the Dutch mission in Ukraine Pieter Jaaap Aalbersberg.

In the first stage of the research, experts from the two countries with more casualties in the disaster will try to locate human remains that have not been found by Ukrainians rescue services, and personal belongings of passengers and crew members died.

So far,  227 coffins have arrived to the Netherlands and Australia believes that 80 corpses may remain to collect.