Internet Would be Controlled in Venezuela 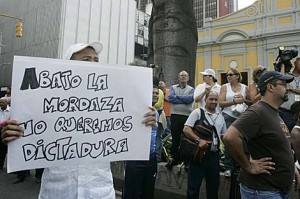 Yesterday Venezuela’s National Assembly approved the law reform on Social Responsibility in Radio and Television (Resorte) in order to include electronic media to the bans.

President Hugo Chávez has to rectify the text and publish it in the official Gazette in order to control the Internet in Venezuela.

Since this reform to the law, radio, television and electronic media must take responsibility for the information of messages that incite: hatred, political and religious intolerance, advocacy to crime, war propaganda themes, alter the public policy, ignore the legitimately constituted authorities, induce the killing, and the anonymity in the network will be prohibited.

If the bans are violated, electronic media will have fines from 50 to 200 tax units.

This month the Assembly approved a law that empowers Hugo Chávez to legislate by decree for 18 months and another that gives him the authority to intervene in banks.