Juan Ribas Domenech, the former Chairman of the Board of Directors of the state-owned company, used an intricate system to collect bribes from reinsurance companies, through a network of companies that involved Biscayne Capital. 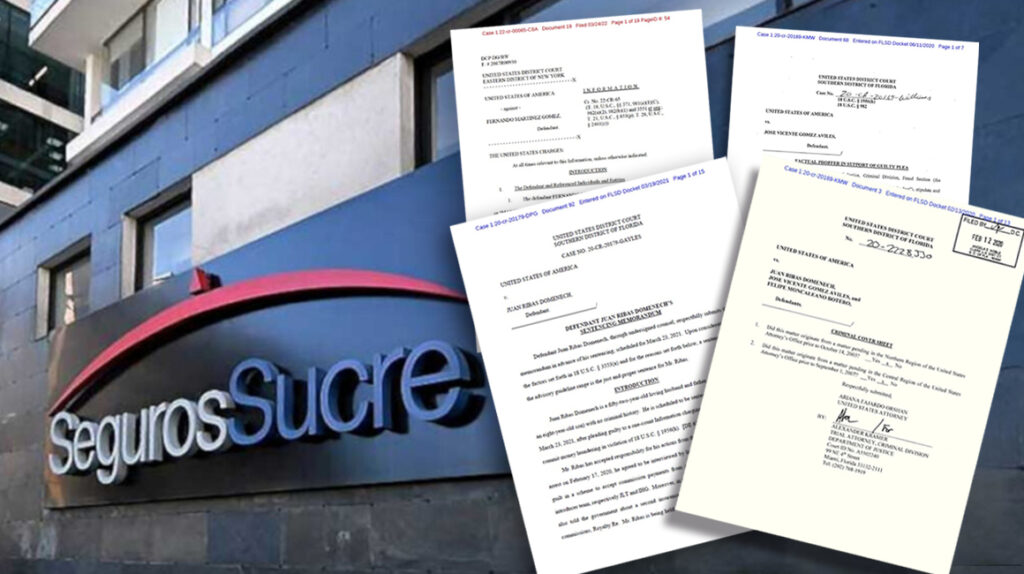 Facsimiles of court documents in at least four cases involving Seguros Sucre in the United States.

The details of the corruption in Seguros Sucre come to light with the new cases opened in the United States, a country that Ecuadorian officials used to receive and move bribes .

A new case, which was made public on July 19, 2022, provides new details about the bribes charged by the former president of the Sucre Board of Directors, Juan Ribas Domenech, sentenced in Florida and who is serving a sentence of four years and three months in prison.

According to investigations by US prosecutors, Ribas Domenech collected bribes in exchange for granting and renewing reinsurance contracts in two schemes:

The accusation of Esteban Merlo Hidalgo, Christian Pintado García and Luis Maldonado Matute , in addition to the information from the investigation of Fernando Martínez Gómez, one of the employees of Biscayne Capital , helps to reveal the route of the bribes in this second scheme, which ended in the hands of Ribas Domenech.

The fixing of bribes

US prosecutors accuse Merlo, Pintado and Maldonado of ” conspiring to pay bribes ” to maintain business with Sucre and Rocafuerte. The defendants used an unidentified intermediary company based in Ecuador and also in Panama, which would be Royalty RE.

According to the prosecutors’ narrative, two London-based international reinsurance companies hired the intermediary to “assist” them in doing business with Sucre and Rocafuerte. These are mentioned in the indictment as reinsurer 1 and 2.

One of these would be Integro Insurance Brokers, which according to Expreso had the reinsurance of a policy from the National Electricity Corporation (CNEL) . This is one of the largest policies assigned to Seguros Sucre.

In 2013, Royalty representatives “recommended” in an email to reinsurer 2 that it was necessary to “share” 50% of the commission “with Ecuador” and “pay local people” to win the contracts.

An email sent by Pintado García to the British reinsurer reads (translated from English):

“I just want to remind you of the commitment we have to fulfill with the local people who have given us the opportunity to win these contracts. For this reason, it is necessary to maintain the agreed percentages (50% for Ecuador – 50% for London). Failure to meet these commitments could lead to the problem of losing the account and not having the opportunity for new business… With only 25% you cannot pay the local cost”.

When asked by the reinsurer which people would be the beneficiaries of this payment, Maldonado replies: ” people related, commercially and politically , in achieving business.”

The two British reinsurers transferred USD 8.3 million to accounts in Panama in the name of Royalty RE, between July 2014 and August 2015. Part of this money ended up in bribes to Ribas Domenech and three other officials from Seguros Sucre and Rocafuerte.

Once the money from the commissions was in the account of the intermediary company Royalty RE in Panama, part of it was used to pay bribes to Ecuadorian officials .

There were direct transfers from the accounts of Pintado García to those of Ribas Domenech and the other three workers from Sucre and Rocafuerte.

Other transfers were made using the Biscayne Capital network. Between 2015 and 2016, Fernando Martínez Gómez, one of Biscayne Capital’s financial advisors, helped move USD 1.16 million from Royalty RE’s account in Panama to an account in Switzerland in the name of a Ribas Domenech company, also Panamanian.

At the end of 2015, and to justify the movements, Martínez Gómez put together a contract for “agricultural consulting services”. Ribas Domenech’s front company was agricultural services.

Between October 2015 and January 2016, the intermediary made six transfers, for a total of USD 905,000, from its accounts in Panama to the accounts in Switzerland for Ribas Domenech.

“Thief who robs a thief”

Biscayne Capital, a fraudulent real estate investment ring, operated like a Ponzi scheme. In other words, he used money from some clients to pay others . Among these resources are also those that were destined for bribes for the Seguros Sucre and Rocafuerte contracts.

Investigations found that even these resources were misused within Biscayne Capital.

Martinez used money from Biscayne clients to buy securities and then moved the proceeds from these investments to Madison Asset accounts (one of the parent companies of Biscayne Capital, based in the Cayman Islands), and from there to recipients of the securities. kickbacks

For example, in March 2016, Martínez Gómez moved money from a client to one of Madison’s accounts at Deutsche Bank of New York, allegedly to make investments in his name. But one day after that transaction, he used that money to transfer USD 29,000 to an account in the name of Ribas Domenech .

The investigations of the US prosecutors reveal an email in which Maldonado asks one of the British reinsurers to buy him tickets for the Wimbledon tennis tournament in the name of the “majority partner of the group that lives in Miami”, that is, Merlo.

Analysis of account movements also shows that Merlo used the Royalty RE account in Panama to make three payments, totaling USD 102,000, to a private school in South Florida on behalf of a relative.

Merlo is the only one who has appeared before the South Florida Court. He was released after paying a USD 1.5 million bail on July 19, 2022.