Reaching 90% of the population vaccinated with the first booster or third dose is the Government’s goal until September 2022. 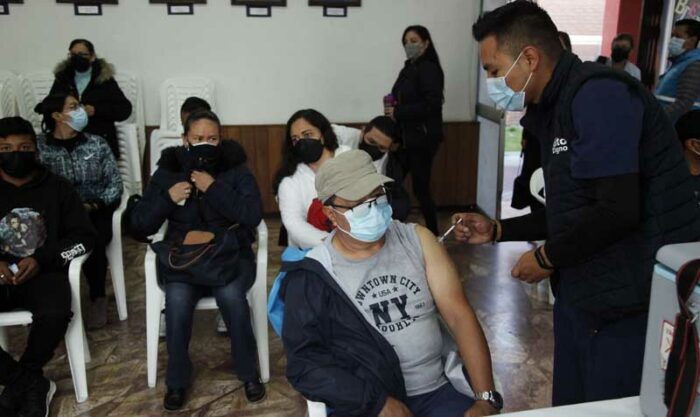 For this, more vaccination points have already been set up in the country and work is being done in conjunction with the private sector . In addition, the inter-institutional incentive committee for mass vaccination and communication strategy was activated .

The idea is that the Ministry of Public Health (MSP) activate the necessary brigades for inoculation in public institutions and thus improve coverage.

Juan Zapata, president of the National Emergency Operations Committee ( COE) , during the session of July 19, 2022, explained that, for example, only in the Senescyt there are 600,000 university students, in the Ministry of Education there are 4,300,000 students more than 180,000 civil servants and 51,000 in the Police .

“We are going to do something similar to what was done with the first and second doses,” Zapata said.

The official added that at the moment vaccination coverage with the first booster reaches 41% and the goal is to reach 90%, that is, 49% more, and reach a total of 4,261,000 people.

After meeting that goal, scheduled for September, the vice president, Alfredo Borrero, mentioned that they are already working on an update in the vaccination card that will no longer be with two doses but with three.

“A series of incentives will be given to citizens so that they go to get vaccinated,” Borrero assured.

For his part, the Minister of Health, José Ruales, pointed out that in the face of a new outbreak of covid-19 cases, it is necessary for citizens to go to the authorized points to apply the booster doses .

He added that the population must learn to live with the virus and identify the places of greatest risk and use the mask in them .

The official indicated that sanctions or obligations cannot continue to be established and what is sought is citizen co -responsibility .

“We hope that there will be a greater number of people with the first reinforcement , we do not want the obligation to reduce commercial activities, that is why we will wait until September,” Ruales said.

In his report, the Minister of Health indicated that in the last four weeks a plateau was observed in the number of cases of  covid-19 , with an increase between 7,000 and 8,000 infections.

On July 18, the highest number of daily cases of the disease in recent weeks was recorded with a total of 3,126 infections.

“We are in the presence of an outbreak, of a new wave of covid-19 in the country. This occurs in other places, such as Europe, and is due to the presence of the BA.4 and BA.5 variants,” the official said.

Ruales explained that the cases occur in all age groups, but more than 50% are in the group between 20 and 49 years old, followed by those over 50 and over 65.

Despite the increase in cases, there is no proportional increase in the number of deaths or hospitalizations, according to the Minister.