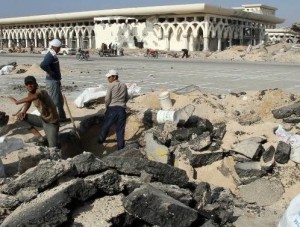 The Israeli Defense Minister, Moshe Yaalon, said that Gaza will not have a seaport or an airport as a result of negotiations with Israel, within the agreed ceasefire on past August.

“The transfer of money and means for rehabilitation is already beginning. But the seaport and airport, that are chimeras. We can discuss it in Cairo, but even Hamas understands that these things are not in our agenda, nor in the one of AP (Palestinian National Authority) or Egypt,” said Yaalon in an interview.

According to the minister, the agreement that the parties already reached in August left open the question of the port and the airport, which probably will not materialize.

Yaalon’s statements occur after the Gaza donor summit held last Sunday in Cairo, in which a budget line of 5,400 million dollars was agreed to help rebuild the Gaza Strip.

The “protector Margin” operation, commanded by Israel, left a toll of some 2,100 Palestinians killed, according to Palestinian officials.