A commission of experts from Israel is in the country, within the framework of the visit made in previous days by the President of the Republic, Guillermo Lasso, with a view to crystallizing an acquisition plan for both the Armed Forces and the National Police. 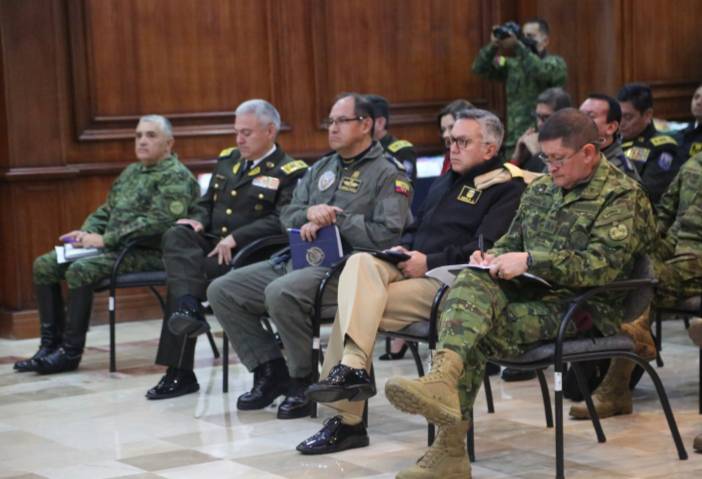 Meeting between police and military authorities of Ecuador and delegates of Israel during this Tuesday, in Quito.

The foreign agents formed three working tables: weapons, equipment and technology, together with the police and military. The meetings began on Monday, November 7, and will continue until Wednesday, November 9.

Juan Zapata, Minister of the Interior, pointed out that in the case of the police institution between 45% and 70% of the acquisition will be handled from State to State with Israel.

“This allows us two things: transparency, which is fundamental, above all also prices and times. And what we cannot do with them will have to be found, perhaps the United States. And the other to do via executive decree, emergency and special regime”, he commented.

The Secretary of State stressed that the purpose of the Government is to equip the Armed Forces and the Police, institutions that have been weakened, he said.

In this context, he mentioned that long weapons will be purchased to counteract organized crime that uses this type of weapon.

Zapata pointed out that the operational capacity of the Police is being strengthened with the first 10,000 uniformed officers of 30,000 offered by the Government, who will leave in April of next year.

“That is important, it not only means more, because these personnel have to have adequate equipment, which is what we are doing with vests, uniforms,” ​​said the minister.

He argued that in parallel to this great acquisition with Israel, $28 million has already been allocated to be with all the procedures for the acquisition of uniforms.

Another $36 million, he said, for vests, $110 million for the construction of six UVCs and 100 UPCs, and $6 million for the purchase of more than 120 intelligence vehicles.

“And also, the $13 million from Guayaquil, the 127 have already been acquired, including patrol cars and buses and the 400 motorcycles that are going to be delivered to us next week. That is, to that we add this great acquisition plan”, he said.

He added that the technology table that works with foreign experts is essential for the elite units of both the Police and the Armed Forces.

“Now, any path, no matter how short you take it, like this one, takes its time. Therefore, we want to make the deadlines as short as possible, but it takes time”, explained the minister. (YO)