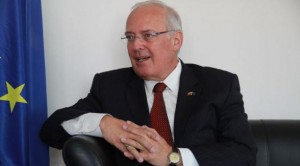 Peter Schwaiger, delegate of the European Union for Ecuador, said that the trade agreement with the European Union (EU) will be submitted for ratification not later than the beginning of 2015 and that process is expected to end in the same year.

On July 17, Ecuador closed its negotiation with Europe, which will allow the entry of 100% of the national export supply without paying tariffs.

Schwaiger noted that the text will be submitted for ratification to the Council of Ministers and to the European Parliament by early 2015, after legal verification and its translation into the 24 official languages.