It would be “serious” if Dhruv accidents are due to mechanical failure, according to Correa 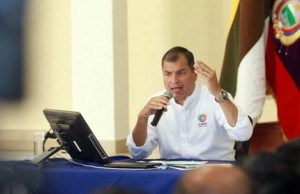 President Rafael Correa said that it would be “serious” if they were mechanical failure the causes of the accidents of two Dhruv helicopters, occurred in recent weeks, and that elevated to four the number of casualties of these devices, of a fleet of seven gained to India in 2008.

Correa said that already is determined that was human error those who caused the accident in the first two devices, one of which was wrecked in February 2014, after having been assigned for the transfer of the trustee and that resulting in the death of its pilot.

He also recalled that the purchase of the Dhruv helicopters made them the Armed Forces of the country after an international bidding process and based on specific technical requirements.

Group anticipates popular consultation of the Mayor of Guayaquil