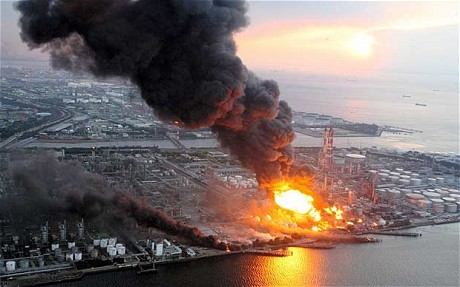 A new nuclear disaster looms in Japan after the earthquake and tsunami devastated the nation. This is the biggest crisis the country has faced in 65 years, since World War II. The prime minister Naoto Kan made this statement. Today a hydrogen explosion occurred in reactor #3 at the Fukushima Daiichi nuclear plant. Reactor #3 has been under close surveillance after the pressure accumulated, the reactor cooling system has started to fail. The Japanese government ordered the six hundred civilians, who have not been evacuated, to remain at their homes until further notice.

A report from the Kyodo news agency informed the nuclear plants of Onagawa and Tokai have also started to malfunction. These events have left 160 people exposed to radiation according to Ryo Miyake, a nuclear official from Japan nuclear agencies. Meanwhile the Shinmoedake volcano erupted ash and rocks. According to a report of NASA, the pictures taken after the tragedy show that the island has moved by 2,4 meters.

So far over 2,000 bodies have been found today near the coast of Miyagi at the northeast of the country. At the moment, 1,833 casualties have been confirmed, this includes the 200 corpses found in the coasts. The thousands of survivors gathered at help centers of emergencies asking for food and medicine. The humanitarian aid of the United Nations informed that the coasts affected by the tsunami remain inaccessible.