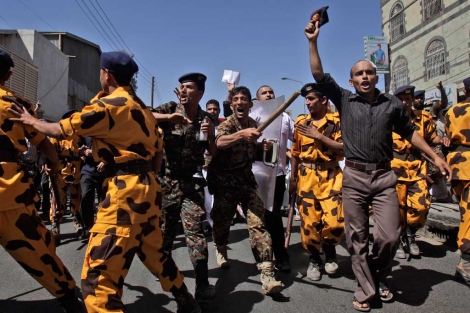 This Sunday the police of Yemen opened fired from higher grounds to the demonstrators that camped near the University of Sana. Their assault left over a hundred wounded, this is the act is the latest violent action against the demonstrators that demand the resignation of the president Ali Abdula Saleh, since he has ruled Yemen for 32-years.

Police officers and supporters of the government attacked the demonstrators with police batons and knives, informed Mohammed al-Abahi, a doctor of an improvised hospital near the university. Wounded civilians were intoxicated by gas, and one of them was hurt by a stray bullet. Meanwhile in the south province of Aden, a group of demonstrators broke into a police station to steal guns. In the province of Taiz, several hostilities occurred between the demonstrators and police officers, leaving a total of four wounded.

Demonstrations in Yemen began in February; the protests accused the government of being weak and expressed their contempt of the difficulties they had to fight off the active members of al Qaida. The demonstrators demand the resignation of president Saleh, who refuses to end his 30-year government. Meanwhile the division general, Abdel Ila al-Qadi stated to the press that he had the intention of visiting the demonstrators in Sana.