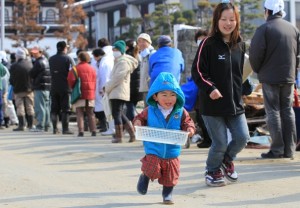 Norio Tsuzumi, the executive vice president of the Tokyo Electric Power Co. a high-ranking Japanese power company, visited an evacuation center to assure the refugees that they are doing all they can to set everything under control. Tokyo Electric had resumed his efforts on Tuesday to restore electrical power to the Tamura City in Fukushima.

The work at the Fukushima Daiichi nuclear power plant has been suspended due to the concerns of radioactive smoke. It has been confirmed that all six reactors are connected, and the officials are ready to pour water into the pool of reactor No. 2 in order to cool it, and stop any emission of radioactive fumes. Five reactors have been placed in cold shutdown. However, the reactor 1, 3, and 4, are heavily damaged.

National Brewery Has Until Midnight to Cancel its Debt